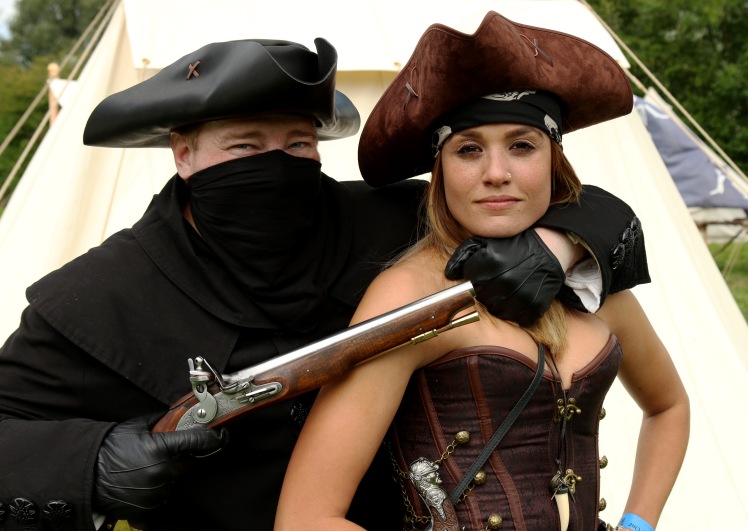 Ryan Skinner from Exiter enjoying playing out the character of the highwayman at The South Wales Pirate Festival. Visitors struck the sails and grabbed their cutlass as they came in search of plunder and booty across the Seven Seas to Caldicot Castle for the pirate festival. 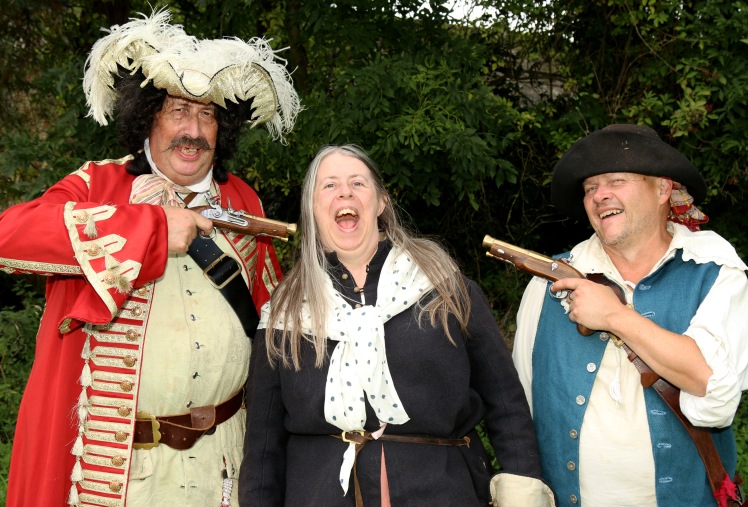 Captain Hook (John Lawler) was on hand to shake everyone’s hand in a bloody pirate greeting. His wife Jo was kept under close watch with the help of Cobber Adams. Pirate Adams said: “I am having a great day. I have been beaten, robbed, stamped on and shot. I have not had a drink yet but I am looking forward to joining others in the pirate’s tavern later.” 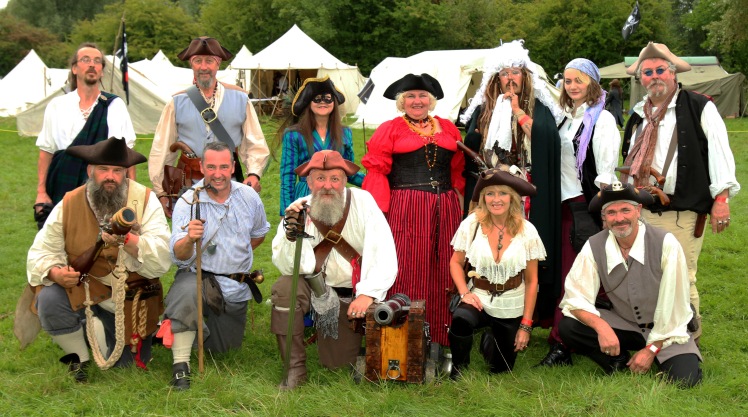 A motley crew of adventurers at Caldicot Castle during a break in the action. Captain Ddriag attempted to take control of the UK largest shipping channel by taking Caldicot Castle. The Kings men were intent on holding off this invasion. The festival featured famous faces such as captains Sparrow, Barbosa and Hook, Living history areas that showed how life was like for people in the 17th / 18th Centuries, activities for the young and young at heart, a fully licenced 18th century tavern, Traders, Militia displays and some very loud bangs. There was a dressing up competition with adult, kids and pet categories.

Shylah (Louise Haggarty) Avrabelle (Becky Culver) and Alana (Anett Novak) tempting lost and lonely sailors with their mermaid imagination. Shylah said: “We love entertaining children not with modern technology but with fantasy and history: and their own imagination.” 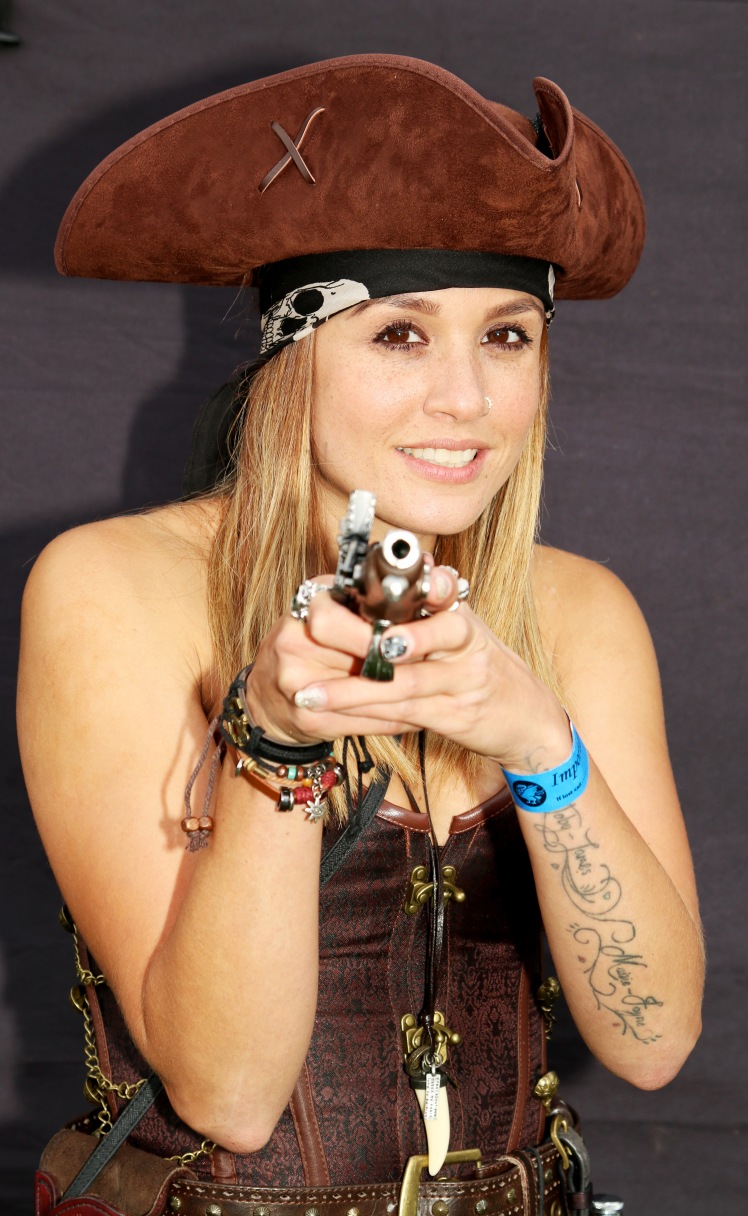 Killer looks from Debbie Regan from Redditch, at The Pirate Festival at Caldicot Castle. The pirates engage in bloody battle with the kings men to gain control of the castle, with the sound of the roar of cannon and musket fire, the clash of polished steel as swords were drawn. People felt the excitement as the ground rumbled with a band of angry pirates charging the enemies ranks. 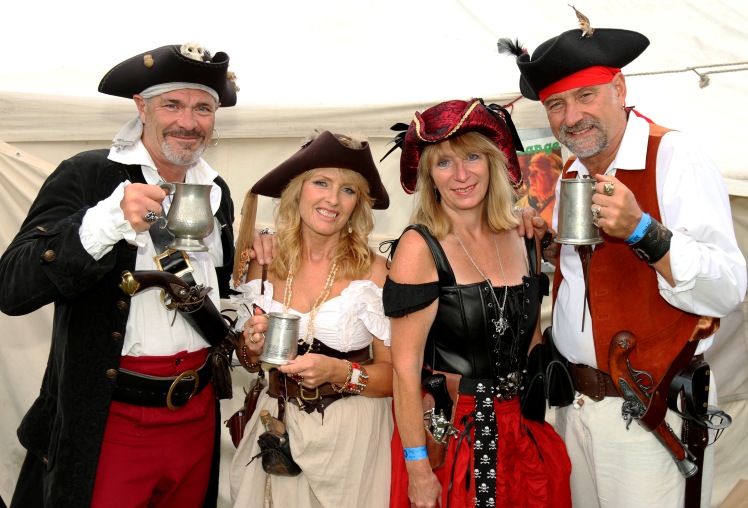 Paul Collins and Gill Siviter with Avril Stallard and Richard Winter. Paul said: “We have found these events a great place to have fiun and make new friends.” 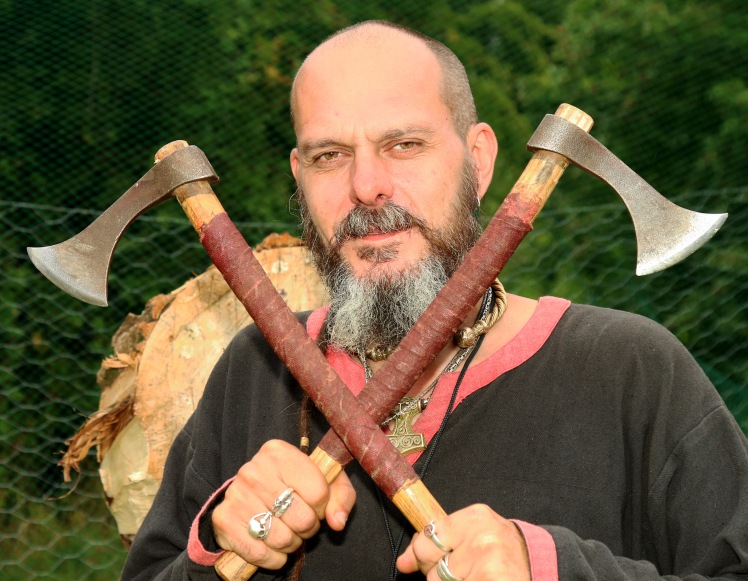 Tim Walker axe thrower from Avolon Axes demonstrated weapons from the Viking period. The axe was often the choice of the poorest man in the Viking age. Even the lowliest farm had to have a wood axe for cutting and splitting wood. In desperation, a poor man could pick up the farm axe and use it in a fight. Visitors and pirates alike saluted the black flag as she flew triumphantly, felt the excitement of battle, met and greeted the worldly outlaws and hear long bloody stories of their lives. 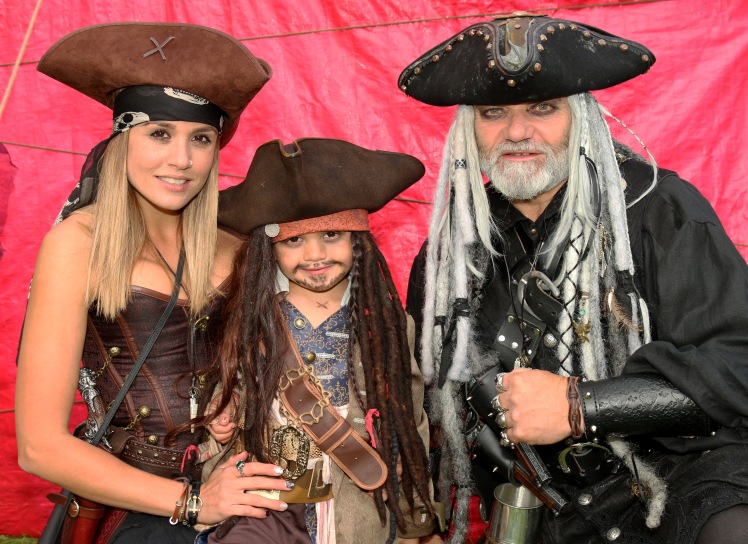 Debbie Regan from Redditch, with her 4 year old son Toby as Jack Sprat Sparrow and with her father, Phil. Debbie said: “We all enjoy camping and having a bonefire. It is a great atmospher and we love socialising in the pirates tavern bar.” 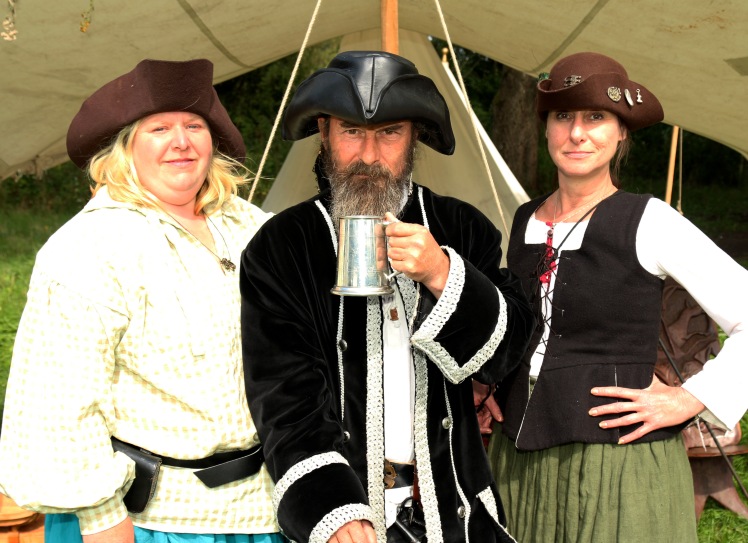 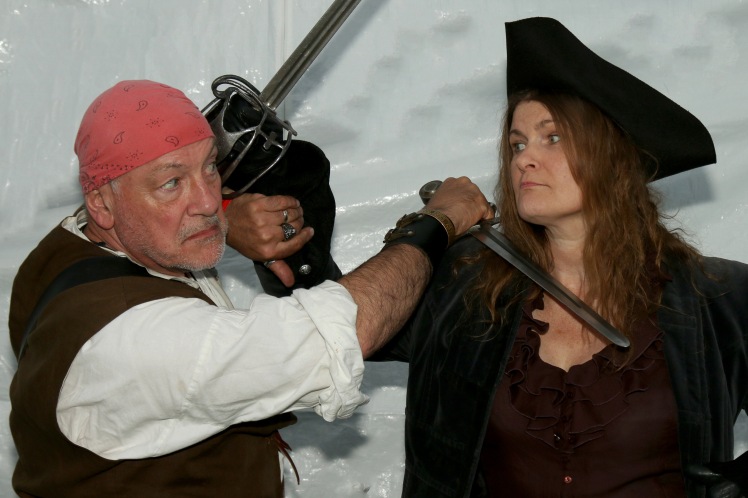 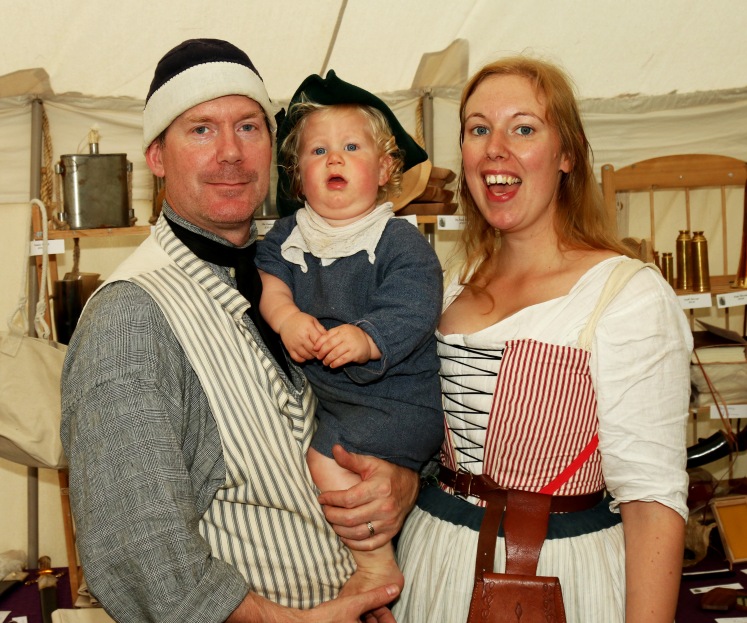 Mike and Sarah Redgate from Wolverhampton with their 14-month-old son Drummond photographed in their trade stand S J Seamstress. 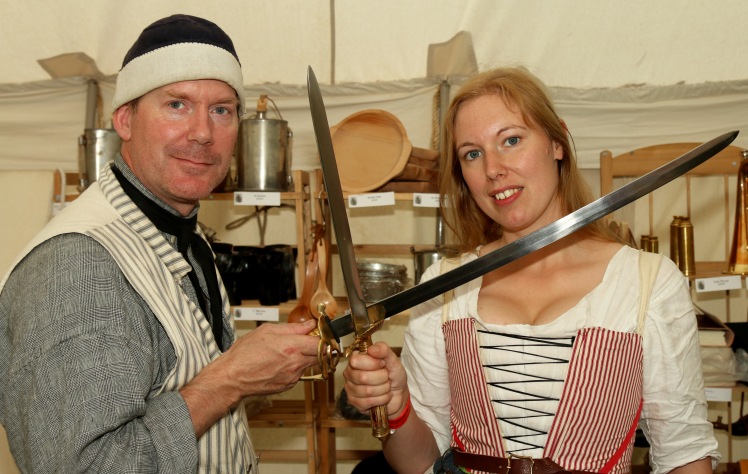 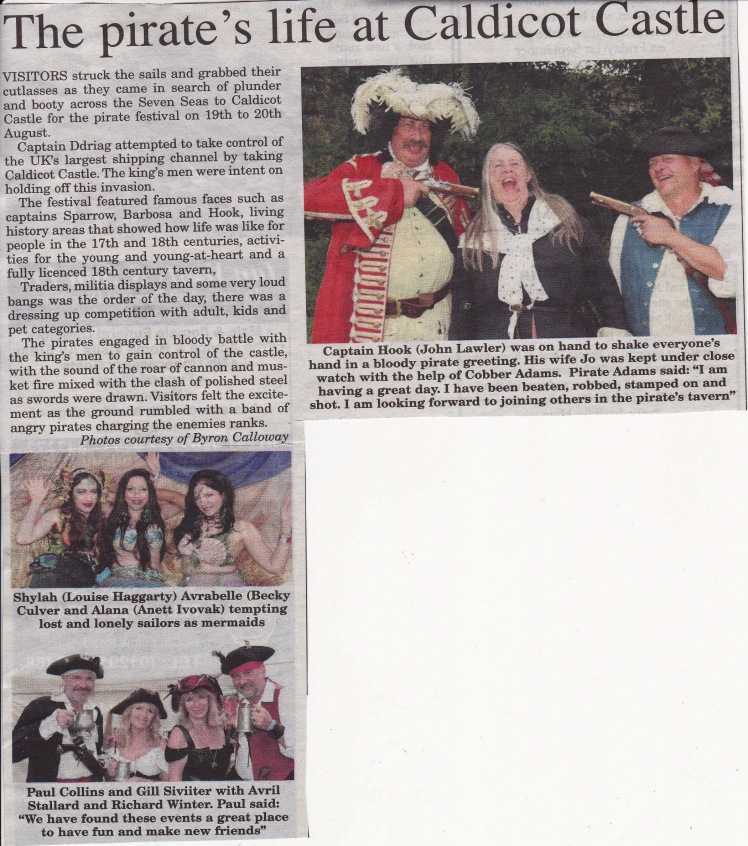