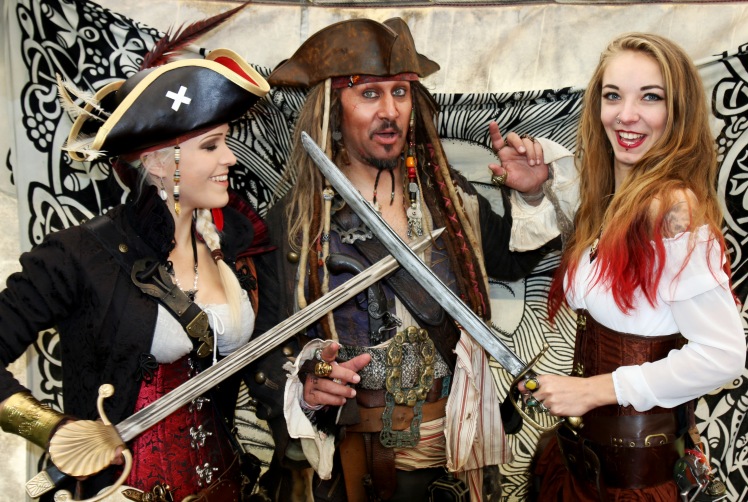 Photographed (Left to Right): Sarah Page, Wayne Truman and Vix Fielder. Wayne said: “When you are a pirate nothing is free but everything is cheap.”

Pirates from all over the seven seas came to Caldicot Castle to gather for the second annual South Wales Pirate Festival. The historical re-enactment event included real life treasure hunts and appearances from famous pirates including Captain Hook and Jack Sparrow. The festival itself incorporated aspects of re-enactment and living history, LARP and Cosplay, and as such it is able to become a fully interactive experience. Approximately 50+ actors played the roles of pirates and soldiers as they took part in the running battles using swords, guns and canons.

The festival featured living history areas that showed what life was like for people in the 17th / 18th Centuries. There were  activities such as a fully licensed 18th century tavern, traders and militia displays. 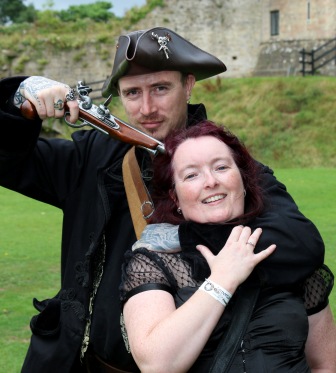 (Photographed Left): Bob Edwards played the role of a minstrel to bring singing and music to the event. Bob is an apothecary  by day and a pirate by night. Bob said: “Caldicot Castle is one of the hidden treasures of Wales.” Watch him sing: HERE

(Photographed Left): Enjoying his very first pirate event was Piper Halliwell and he brought his wife Maresa along to join in the fun. Piper said: “I really enjoyed the location and everyone was great company except evil King George who tried to hang me.”

Rob Davies from Cwmbran attended the event and he said: “I find it liberating with a great sense of freedom to be a pirate for the weekend. It is both educational by being living history and it is also entertaining. It is great as a spectator event or when engaging as a re-enactor. You can join in the escapism and forget all of your troubles in life.” 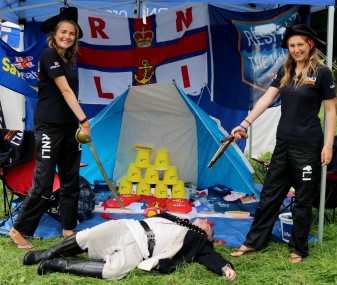 Joining in the fun was Bethan Lee (photographed: Left to Right) from the RNLI face-to-face team with Pirate Pikey Mike (Sully Smugglers) from Bristol and Lily Robinson also one of the RNLI face-to-face team engaging in awareness and fundraising for the RNLI. The RNLI is the charity that saves lives at sea. They provide, on call, a 24-hour lifeboat search and rescue service around the UK and Ireland, and a seasonal lifeguard service. With their lifeboats, lifeguards, safety advice and flood rescue, they are committed to saving lives. 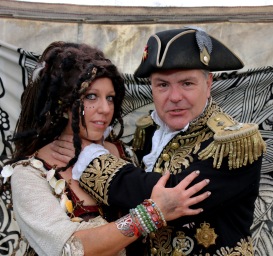 Pirate Barbs Saxton from Burton-on-Trent with the Captain’s monkey Spanky. Claire Savage (Calypso Goddess of the Sea) with Robert Read (The Admiral). Chris Stocking from Norfolk enjoyed the event with his 15 year old daughter Tallulah. There was an ongoing storyline each day that featured a crew of pirates on the run from King George, with battles in and around the castle.