Humanitarian crisis’ for ME sufferers in Wales

On the 11th of May, 2019 ME/CFS sufferers and their friends and family members took to the streets to show the world they are here and there are #MillionsMissing. People all around the world continue with the fight for improvements in the lives of people with Myalgic Encephalomyelitis (ME). Millions Missing Event, was held at the Hayes Cardiff outside the Library from 11am to 4pm. The event was organised by the ME Support in Glamorgan (MESiG) Group.

Myalgic Encephalomyelitis (ME) or Chronic Fatigue Syndrome (CFS) is usually triggered by a viral infection which leads to muscle fatigue, pain and neurological symptoms such as short term memory loss. About 13,000 people in Wales are thought to suffer from ME, and 70% of those are women. 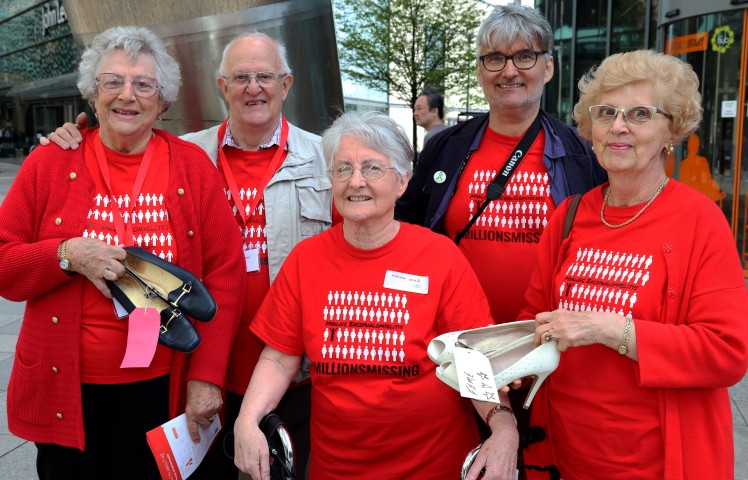 Photographed (L-R): Mary Jones, Dennis Jones, Miriam Woods, Mark Morgan and Deirdre Penny. Mark Morgan, a member of MESiG, said: “The ME Support in Glamorgan Group (MESiG) is a charitable group based in North Cardiff. We currently have nearly 150 members. We hosted the Millions Missing event in the Hayes in the Centre of Cardiff in order to raise awareness about ME/CFS. Millions Missing is a global campaign. Shoes are laid out in order to represent those enduring ME, who are too ill to attend themselves.”

Important strides in making their voices heard and raising awareness about the debilitating and painful illness has been made. This work included raising awareness before government leaders, locally and across the world. The ME/CFS community remain persistent in making demands for large-scale change. They took to the streets again in the centre of the City of Cardiff.

Kathryn, a member of the choir Side-by-side, who has been suffering from ME since 2014 still tries to work part time when she feels well enough. Kathryn said: “Music is a passion and helps my state of mind. This is a great event to spread awareness, for the voices of the ‘missing’ to be heard. It makes the invisible visible and highlights the severity of the illness around the world.’  People with ME/CFS are asking for equitable research funding and care, accurate medical education and an end to the harm and stigma associated with the condition.

In some the effects of ME/CFS can be minimal but in a large number, lives are changed drastically: in the young, schooling and higher education can be severely disrupted; in the working population, employment becomes impossible for many. For all, social life and family life become restricted and in some cases severely strained. People may be housebound or confined to bed for months or years.

FindME is a three-week digital campaign by a group of five students from across the globe studying International Public Relations and Global Communication Management at Cardiff University.

Janna said: “We wanted to work with MESiG because we feel the work that they do is of great value. We have enjoyed meeting and working with the committee members to help to support people suffering from this terrible illness. Our aim has been to promote a support group in Glamorgan including the Millions Missing event. we love staying in Cardiff, and Wales in general. I would never have thought to coming to Wales and it is such a beautiful country.”

The ME Support in Glamorgan (MESiG) Group is a charity that is supporting those with ME/CFS and/or Fibromyalgia. MESiG were established in 1988, revived and renamed in 2004/05 by a small group of volunteers with personal experience of M.E or Fibromyalgia who wanted to see change.

Side-by-Side was established in April 2016 in Caerphilly as a choir providing support, understanding, awareness and acceptance of Autism all through the medium of music. Many of the members of Side-by-Side are on the spectrum: or parents, friends or family of someone on the spectrum. Over the time that this choir has functioned the call for support has evolved and Side-by-Side not only support the world of autism but they also provide a safe place for anyone who enjoys singing, no matter their level of ability.

Whether you suffer from the debilitating effects of ME/CFS or are supporting a family member or friend it is hoped the ME Support in Glamorgan is both informative and friendly.

Y Byd ar Bedwar is the only current affairs series to have been on S4C ever since the channel was launched in 1982. The programme has a reputation for hard-hitting investigative journalism of the highest standard.

ME/CFS has attracted more than its fair share of controversy. Initially, and for many years, there was a debate as to whether it was actually an illness at all. Although the situation is still not perfect, many influential bodies, (The World Health Organisation, the Department of Social Security, the Department of Health, the Royal Colleges of Physicians, Psychiatrists and General Practitioners amongst them) are now in agreement that it is real.

A Welsh Government spokesman said: “We understand the challenges faced by people living with this condition and the impact it can have on their lives and their families. “That is why we are working with healthcare professionals and the third sector to strengthen ME services available across Wales.”

Royal College of General Practitioners chairman Dr Peter Saul said: “ME is very difficult to diagnose and distinguish from other conditions. “It can take longer to diagnose it than other conditions but patients should not feel that they are being ignored or dismissed,” he added. “It is a sort of invisible condition for which there are no quick medical treatments.”