Hoggin’ the Bridge is an annual motorbike charity event and it took last place on Sunday, September 30. Hundreds of bikers travelled from Aust in South Gloucestershire, cross the Severn Bridge and head to David Broome Equestrian Centre in Crick, Monmouthshire. The event is in its 19th yearand it is run by Caldicot Town Team, a not-for-profit community intere.

Following the huge success of the 2017 Hoggin The Bridge event the organisers have spent time listening to feedback from those who attended: and after giving away over £13,500 pounds to 24 charitable organisations they have made changes that  ensured the event ran better than ever, with more money than previously going to charity.

Photographed (L-R) Fred Bishop, Wayne Lloyd, Neil Lloyd, Marc Shave and Mike Waters. Coming from Cwmbran, the guys were enjoying the day out. For Fred this as his first event so he jokingly said he ‘would not be leading the way.’ Wayne Lloyd said: ‘it is nice to see so many people attending. My Brother Neil and I have been riding since we were kids’. He joked: ‘I love the grease, the sounds, the smells: and that is just the bikers.’

Photograhed (L – R): Steve Evans, Teresa Dewn and Terry Axe: all regular veterans of the event, riding up on the day from Somerset and North Devon.  Teresa Said: ‘ It is a good event and raises money for good charitable causes.”

Photograhed: Dawn on her Ural copy of a Vintage BMW with sidecar. Dawn, a local Chepstow resident, has attended all the ‘Hogging the Bridge’ events. Even the year she had surgery did not hold her back from watching and supporting the riders. Dawn said: “I have been riding since 2004 when I decided, after being a mother and wife, it was time for me to have a new exciting interest in my life. I have been biking all over Wales and France, and love it. I am glad this event is still happening after it had to leave Chepstow. I am glad Caldicot council had the compassion to keep the event going.  There are lots of people here and the public enjoy  the free spectacle, a lovely day out for all the family, with bikers coming from far and wide; from Scotland and even Australia.’ 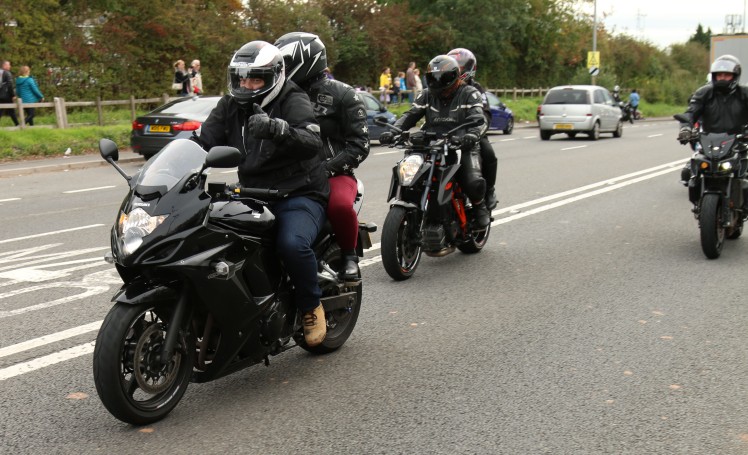