Since 2001 The Welsh Perry and Cider Society has been working to unite and reignite the craft cider and perry industry in Wales. Their mission is to encourage a greater appreciation of these natural craft drinks, spearhead a new era of orchard planting and promote Welsh perry and cider as an indigenous alternative to wine. 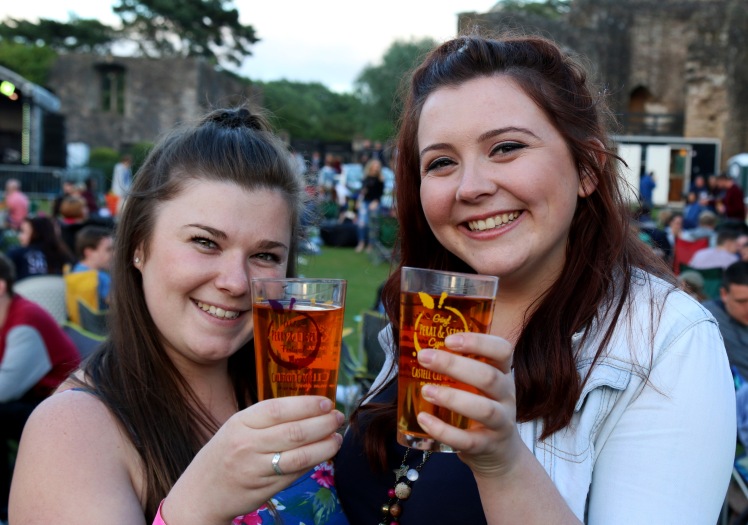 Stephanie Thomas (21) and Beth Jones (22) from Caldicot enjoying the cider in the sunshine at Caldicot Castle at the Welsh Perry and Cider Festival. Beth said: “This is the date I most look forward to in my annual calendar. It is a great location for families to enjoy. We are loving the atmosphere, the music and the cider.”

The Welsh Perry & Cider Festival was born in the gardens and out buildings of the Clytha Arms, near Abergavenny. It was set to be the flagship event of the then The Welsh Perry & Cider Society. Event Organiser Cressida Prout said: “It was the fifth consecutive year that The Welsh Cider Festival has been held at Caldicot Castile and it has been our busiest so far. The sunshine and the setting could not be better for sampling fine craft cider and listening to the best of our local talent.”

The annual Welsh Perry & Cider Festival – your perfect mix of live music, local food, and of course – perry and cider.

Rich Williams with his brother Pete from Williams Brothers Cider celebrating receiving Gold for their “Splanky” bottled sparking Cider. Pete said: “We have been making Cider and Perry since 2009 and have attended the previous venues in Clytha Arms Abergavenny. The Caldicot Castle venue is enclosed and is the best venue to showcase Welsh artisan Cider and Perry.”

Pictured are Janet and Adrian Percival receiving an award from Jessica Deathe for their Jaspels Cider as best cider producing newcomer. Janet said: “Fabulous festival, love the location and we love the cider.”

For many years, they have produced cider on a small scale for personal use, but in autumn 2015 they noticed that many apple trees had an abundance of fruit going to waste and this sparked the idea to upscale and produce a new Craft Cider. The following summer they made a plea via social media for unwanted Anglesey apples and pears and they were overwhelmed by the enthusiastic response. Offers of fruit came flooding in from single trees to orchards allowing them to embark on the bountiful task of collecting apples from all over the island.

Pictured are Natascha Graves , Arianwen Croft (12) and Lynne Croft at their ‘Cheeky Artisans’ stall. Natascha and Lynne have been collaborating on a joint venture to create concrete decorations and handcrafted felts.  Arianwen Croftsaid: “We love the Castle setting. It is family friendly and a positive community event, set in stunning architectual beauty and the bad weather on day one did not not dampened our spirits. “The ‘Cheeky Atrisans’ have just opened a shop in Newport’s indoor market.

The Bakestones on stage at the festival.