Thousands of foodies arrived in the South Wales market town of Abegavenny to witness their favorite chefs in action for the food festival.

Monika Kudaseva, 23, from Newport (originally from Lithuania) photographed with Nerys Howell (food consultant) and Angharad Evens during a forage breakfast cooking demonstration at the Abergavenny Food Festival. Monika said: ‘The weather was perfect and there was lots to see and do. My favorite thing was to eat a free jam doughnut that was hanging on a piece of string in the doughnut eating competition!”

Gabi Grubb, 15, Frank Jones and Lesley Reynolds members of the Abergavenny Light Opera Company had ‘a fantastic time on the streets of Abergavenny at the food festival helping to promote the work of St David’s Foundation Hospice Care.’ The company is holding a concert ‘Pack Up Your Troubles’ (Hits of the Blitz and WWI) to commemorate 100 years of war, in aid of St David’s.

Wales is having a Year of Adventure in 2016. The Welsh government has a campaign that aims to boost a section of the tourism industry which already contributes £481m to the Welsh economy and supports more than 8,000 jobs. Heather Myers, Chief Executive of the Festival said: “A lot of hard-work and dedication goes into organizing the Festival and it’s amazing to see that it has all paid off.” 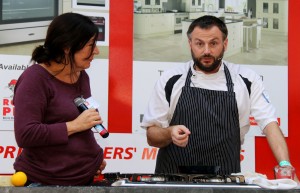 Chef Jethro Carr from the Kitchen Academy pictured with Monika Kudaseva demonstrating how to cook meatballs. Mr Carr likes to use good, healthy, fresh ingredients, and not to fuss around with them too much.