The Freemen of Gwent staged a Medieval Fayre at Caldicot Castle, that illustrated the way medieval warriors lived. They are primarily based in South Wales and they look to portray the period from the early years of the 100 Years War (1337) up to and including the Battle of Agincourt (1415).

Ann Horton said: “We enjoyed bringing education and entertainment to the 1200+ visitors that attended this event at Caldicot Castle.”

The Destrier Society performed a spectacular Jousting Tournament where members of the public met the knights as they tested themselves on their warhorses. Destrier was founded in 1996 as a cavalry group for 15th century battle re-enactments. 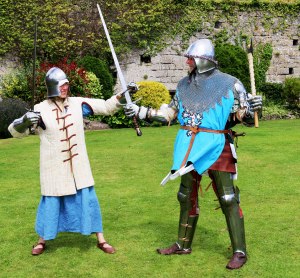