Visitors to Chepstow Castle enjoyed a Freemen of Gwent Living History weekend and they discovered what life was like at Chepstow Castle 900 years ago. People found out about medieval foods, clothes and weapons and learnt how to dress like a lady or knight.

Tony Jones from Hereford in the character of Friar Godric. Tony who also plays a knight and fights in the battles, said: “I have enjoyed being a member for nine years. I have always been interested in the Black Monks and so this is a great character to portray. I find this an escape and I do love history. We can inform and entertain both the public and ourselves. This is like a club for likeminded people.”

Craig Rhodes is the Freemen of Gwent’s battle commander and he has been with the group fot 16 years. At her first event is Nicola Mc Laren-Tranter as a lady of high social standing and has a six year-old Barn Owl called Marley.

The Freemen of Gwent are primarily based in South Wales, although they have members located far and wide across the country. They look to portray the period from the early years of the 100 Years War (1337) up to and including the Battle of Agincourt (1415). This period was overseen by Edward III who was one of the most successful English monarchs of the Middle Ages.

Nicola said: “The weather is dry and bright after a night of heavy rain. It was a cold damp start for us all because we sleep in tents overnight. The whole atmosphere of the encampment is always one of amazing camaraderie.” 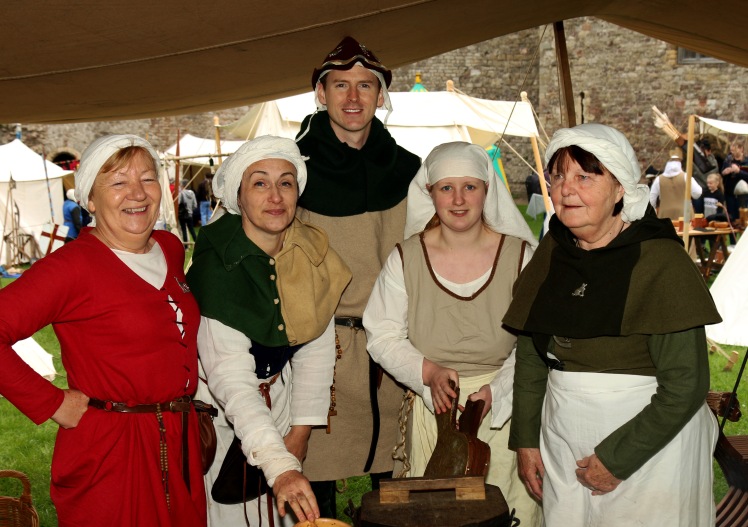 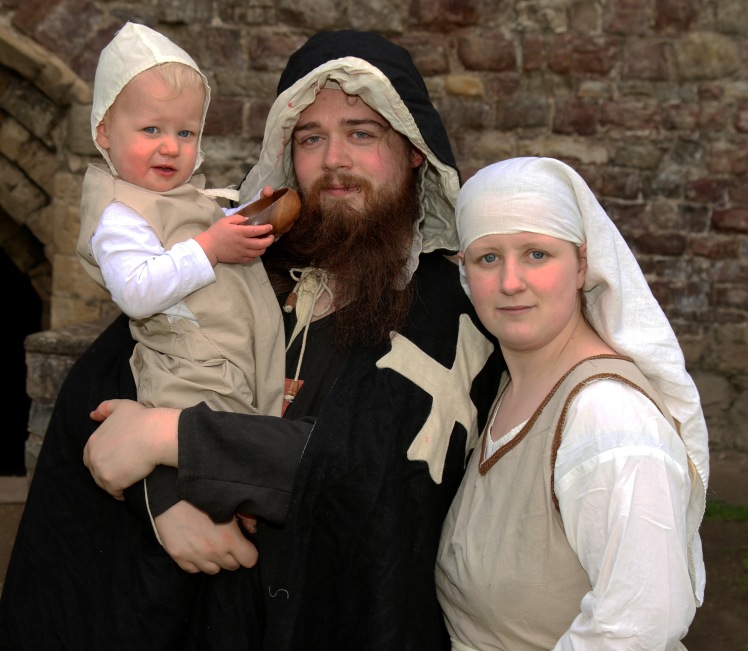 Alyn Davies is photographed playing the role of a Knights Hospitaller – has been with the group for six years. He is with Amanda Rogers and two-year old Gwen.

Alyn said: “I am interested in the fact that while modern medicine has advanced and is more hygienic – you can still clear similarity between a lot of the old tool and what is in use today. I was looking for a hobby and this group was very welcoming.”

Squire in-training Brian Mellor was busy trying to make his way up the medieval social ladder by preparing the food and drink. William Marshal, 1st Earl of Pembroke (1146 or 1147 – 14 May 1219), also called William the Marshal  was an Anglo-Norman soldier and statesman.

Experiencing how it could be for a Welsh mercenary is Christopher Hochstein (10) and his brother Mathew (7) from Cheltenham. Photographed with Adrian Edwards from the Freemen of Gwent.

Teacher Sandra Thomas from Pontypool acted out the role of a weaving merchant. Sandra has been attending these events for eight years and said: “My grandmother taught me weaving, spinning and dyeing. I love it here. It is a beautiful castle and we have a lot of interest from the public at these living history display events.”