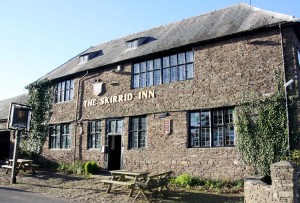 Monika Kudaseva, 22, from Newport visited the ancient Skirrid Mountain Inn near Abergavenny, perhaps the oldest pub in Wales and listed in the chronicles from 1100. Monika who is originally from Lithuania was grabbed by the desire to investigate the alleged historical ghost hotspot.

After finding comfort in a hot coffee and cake by the open fire in the bar Monika set out determinedly in her search for anything strange or spooky. The first floor was reputedly used as a Courtroom where capital punishment was imposed for certain offenses, including sheep stealing. Local legend has it that as many as 180 convicted criminals were hanged, some possibly from an oak beam over the well of the staircase outside of the Courtroom. Markings, possibly from rope marks, still exist on the staircase wood. 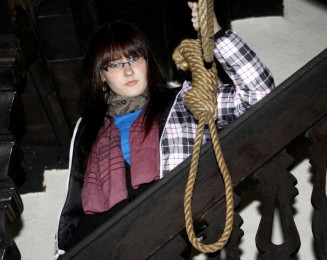 It is also claimed to be the home of several ghosts or spirits as well as the scene of numerous supernatural occurrences or paranormal activities. Indeed the reputation of the inn is such that it has merited the attendance of a number of paranormal investigators over the years, including the Midlands’ Ghost Hunt company, Eerie Evenings, who have gone on record in the past to say that it is one of the most paranormally active venues they have ever investigated. The inn has been featured on TV’s Extreme Ghost Stories and Most Haunted with Yvette Fielding. 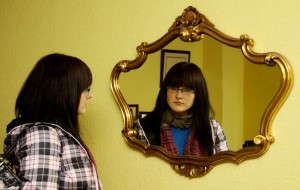 Monika hung about on the staircase for a while before reflecting on the past in the surprisingly warm and inviting bedrooms. No paranormal activity was found to be happening under the fourposter beds.

Monika said: “Many of the historic buildings in my own country were destroyed by war and so I love the opportunity to see any old building or historic site and fortunately there are so many wonderful places to visit here in Wales.” Photography student Monika failed to record any evidence of paranormal activities however she did prove that she is not afraid of finding no ghost.